There are 2 main categories of skin cancer: they are Melanoma and Non-Melanoma skin cancer.

What types of skin cancer are there? 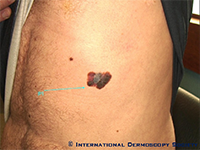 BCCs are the most common type of skin cancer and sometimes referred to as “rodent ulcers” They develop from basal cells and these are found in the deepest part of the outer layer of the skin (the epidermis). They develop mostly in areas of skin exposed to the sun, including parts of the face such as the nose, forehead and cheeks. Also, on your back or lower legs.

SCC is the second most common type of skin cancer in the UK. It is generally faster growing than basal cell cancers. They begin in cells called keratinocytes, which are found in the epidermis. Most SCCs develop on areas of skin exposed to the sun. These areas include parts of the head, neck, and on the back of your hands and forearms.

Have a question about the signs and symptoms of skin cancer?

Signs to look out for:

A new or changing mole:

A non-healing skin lesion that has been present longer than 4 weeks.

How can I check my back/hard to reach areas?

Check your skin for changes once a month. A friend or family member can help you particularly with checking areas that you cannot easily inspect, such as your back. Check your skin from head to toe. Including fingernails, toenails and between toes Use of a mirror can help check the soles of your feet.

How do I know if my mole has changed over time?

Skin should be examined monthly for moles that are growing, or changing:

What increases my risk of getting skin cancer?

Yes! You are at risk if you sit in direct sunlight even with a high factor sun cream as there is no such thing as a total block. Therefore, it is important that you wear a broad brimmed hat, sunglasses, protective clothing and seek the shade.

How can I reduce my risk of getting skin cancer?

If I spend longer in the sun will that increase my Vitamin D?

This is radiation from the sun and sunbeds – UV radiation can burn, tan age your skin which ultimately increases your risk of skin cancer.

Is there a safe way to tan?

Tan is DAMAGE, therefore each time you tan you increase your risk of skin cancer! A safe tan does not exist.

Do I need sun cream on a cool cloudy day?

It is a myth that UV damage only occurs on hot sunny days, therefore, it is advisable to protect the skin when UV levels are higher – In Norther Ireland this will be from early March until late October.

Who is at increased risk of skin cancer?

Can risk be reduced even if I have had a lot of sun burning and exposure?

The answer is yes. You reduce your risk at any time by using good sun protection, wearing protective clothing, a hat, sunglasses and staying in the shade out of direct sunlight

What Sun Cream should I use?

Sun cream must protect against UVA which protects against ageing of the skin and the risk of skin cancer. UVB which will help against sunburning and increased skin cancer risk.

How should I use Sun Cream?

Sun cream needs to be applied 30 minutes prior to going out – this will give it time to activate to protect the skin You should reapply after swimming and always reapply every 2 hours.

Remember there is no safe tan, avoid burning and tanning to reduce your risk of skin cancer and prematurely ageing your skin.
Points to remember!

No posts to show!