Home About Us Our Patrons

With a career in media spanning more than five decades, Portadown born Gloria is still a regular on our TV screens, both on BBC and ITV. Gloria’s daughter Caron Keating, died of breast cancer in 2004, aged 41. A cancer charity named the Caron Keating Foundation was set up by Gloria in memory of Caron. The foundation makes a considerable difference to many individuals and families affected and dealing with cancer, through assisting cancer charities throughout the UK, including Action Cancer. Gloria’s relationship with Action Cancer stems back many years with Gloria being one of the first women to come for a breast screening. In recent years, Gloria has also been the face of our Breast Cancer Awareness Month campaign in October, encouraging women aged 40-49 and 70 plus to book a breast screening appointment with Action Cancer. Gloria officially launched our new Big Bus at a special celebration event at Hillsborough Castle in September 2021. 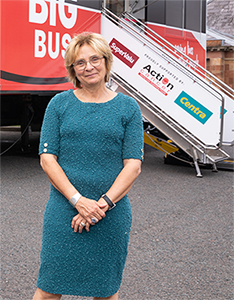 Nicky is the daughter of the charity’s Founder, Dr George Edelstyn and was appointed a Patron of the charity in October 2018. She is a Professor of Cognitive Neuropsychology and Rehabilitation at Keele University, Staffordshire, Director of the Psychology Research Centre and former honorary secretary of the British Neuropsychological Society.

Nicky gained a PhD in visual neurophysiology from the Department of Communication and Neuroscience, Keele University in 1988, and went onto complete a series of postdoctoral fellowships at Oxford and Birmingham Universities. She returned to Keele University in 1999 as lecturer, promoted to senior lecturer in 2006, and Professor of Cognitive Neuropsychology and Rehabilitation in 2013.

No posts to show!